No presidential candidates visit north-central Iowa on 4th of July

CLEAR LAKE — While none of the nine Democratic presidential candidates who spent their time on the ground in Iowa on the 4th of July stopped in north-central Iowa, two candidates did make an appearance in Cerro Gordo County this week.

Ohio congressman Tim Ryan stopped in Mason City on Tuesday to tour the Golden Grain Energy ethanol plant as well as hold an education roundtable. Ryan’s poll numbers dropped after last week’s first debate. A CNN poll shows two months ago that Ryan had five percent support, but the latest poll shows that’s down to one percent. We asked Ryan what’s keeping him in a crowded race.  “We’ve had the best fundraising days right after the debate. I think with Vice President Biden slipping in the second debate, a lot of people from the early states were calling me because they think I’m someone who can kind of fill that working-class lane that Vice President Biden was in. We had a great crowd this morning in Sioux City and we’re just going to continue to do what we’re doing.”

Ryan says he wants to fight for blue-collar workers in America.  “We’re trying to bring front-and-center the workers who I feel have been left behind for a long time, and those are white workers, black workers, brown workers all over the United States that have fallen behind the last 30 or 40 years. People know that’s where I come from. You know in the 7 and 1/2 minutes of the debate that I got to speak up in, I was very clear that that’s why I’m in the race and that’s who I’ll be president for.”

Four months ago, former Texas congressman Beto O’Rourke had to apologize for a joke made during an Iowa campaign stop that he sometimes helped his wife raise their three children. O’Rourke’s wife Amy and their children accompanied him during his stop in Clear Lake on Wednesday night.

He says he and his wife feel it’s important that the kids share the experience with them.  “They get to hear other people stand up and ask questions or tell their stories. I think it’s really powerful for them. And what is really surprised me is, even Henry who is 8 years old, the stories stay with him and it’ll be months later and they’ll bring some of these stories back up again, or an issue that we talked about like climate change and they’ll bring that back up. Their ability to absorb what is most meaningful in these conversations and town halls is really surprising to me, and it makes me feel better about the decision to bring them on the road.”

O’Rourke’s father was a politician based in El Paso, and he says he had to go to campaign events too when he was growing up. “My dad was always running for office in El Paso, so we never had to leave the city limits, but we would go to campaign events in El Paso, which kind of probably like these guys I didn’t always like doing. If I can play basketball with my friends or I go to a campaign event, I’m going to choose basketball. Part of my responsibility as a parent is to try to expose them to the kind of things that help them understand what’s happening in the world right now, and also help them to understand why we spend so much time apart, and why their dad is on the road, and why would ever consider doing something like this in the in the first place.”

O’Rourke and his family spent about a half hour walking through the carnival in downtown Clear Lake, with his son winning a hermit crab playing the fish bowl game. 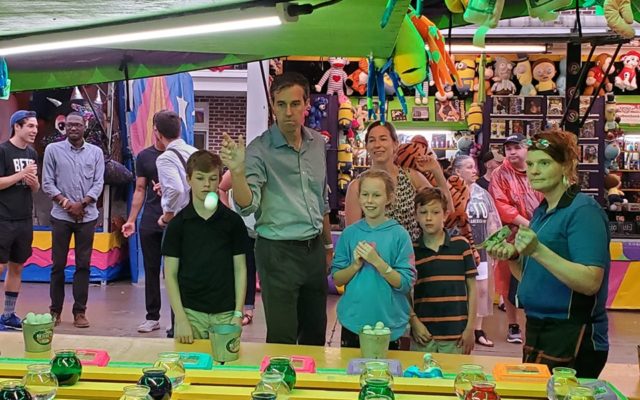