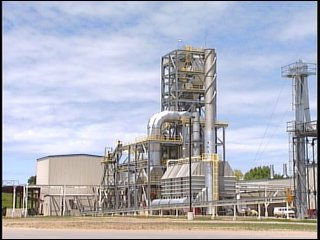 MERRILL — A northwest Iowa ethanol plant suspended production this week “until further notice.” Plymouth Energy in Merrill is one of at least 10 ethanol plants in the country to temporarily shut down. Three others have closed.

“A lot of the experts say we’ve got about a 10% overage of production and until that production comes off line, the economics aren’t going to improve,” Iowa Renewable Fuels Association executive director Monte Shaw told Radio Iowa.

Shaw said this supply-demand imbalance is caused by waivers federal officials are granting big oil companies — so refiners don’t have to blend as much ethanol into gasoline.

“If you look at the demand destruction from these waivers that the Trump Administration has done, for the first time in 21 years, in 2018 the U.S. used less ethanol than the prior year,” Shaw said. “In other words, for 20 straight years we always used more ethanol each and every year than we did the year before here domestically, not talking exports. In 2018, we actually took a step backwards.”

The past 18 months, Shaw said, have been a very rough on the industry.

“A certain portion of the industry has made a little bit of money, barely; some have been just struggling to break even and then there’s a portion of our industry which has been losing real money on a cash basis and you can only do that for so long,” Shaw said. “Eventually your cash reserves run out and you can’t buy corn and so we did see that come home to roost, even in Iowa.”

The board of Plymouth Energy issued a statement, saying all existing corn contracts will be honored and they hope to resume production “in the not too distant future.” A coalition of groups representing ag and biofuels interests today asked a federal court to allow a 2018 lawsuit challenging the EPA’s management of renewable fuels policy to proceed. Shaw said if EPA policy doesn’t change over the next few months, more ethanol plant managers may consider temporarily shutting down production.

Shaw said if the EPA were to adhere to the rules outlined by the Renewable Fuels Standard, there would be an “immediate impact” on corn prices and ethanol production would quickly rebound.

The statement from Plymouth Energy’s board of directors is below:

The ethanol industry continues to operate in negative margins, absent a deal with China or a serious pullback in production we do not see a recovery in the near future. The board of Plymouth Energy has decided to suspend production until further notice. All existing corn contracts on the books will be honored. Please take notice that an orderly and timely process will take place to honor all purchase contracts of grain made to Lakeview-Plymouth Grains LLC. Roger will work with you to ensure this happens

We look forward to working with you again on resuming production and hopefully the margin environment will cooperate with us for this to happen in the not too distant future.

We appreciate your business and support.