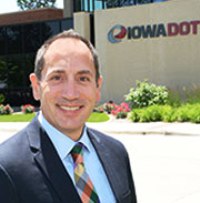 Reynolds spokesman Pat Garrett said Tuesday that the governor has installed Trombino as interim director of the Department of Administrative Services while she recruits a permanent replacement.

The move comes after the Iowa Senate adjourned last month without confirming Janet Phipps Burkhead to another term as the agency’s director. Minority Democrats had blocked the appointment due to concerns about her handling of sexual harassment allegations in state government, among other things.

Trombino has been serving as the state’s chief operations officer since leaving the private sector to return to government in January. Previously, he was director of the Iowa Department of Transportation before resigning in 2016. Trombino was also President Trump’s pick to lead the Federal Highway Administration, but withdrew from consideration in 2017.