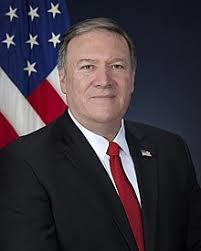 “I’m very, very hopeful we’ll be able to wrap up and get a truly successful outcome for the United States and for American ag,” Pompeo said. Pompeo spoke late Monday afternoon at a forum in Des Moines organized by the Iowa Farm Bureau. John Maxwell, an eastern Iowa dairy farmer, was among those who asked Pompeo a question about the deal.

“Would you comment on any kind of time frame because every day that marches on it’s getting tougher and tougher?” Maxwell asked.

Pompeo responded: “No,” and both Pompeo and the audience laughed. “You remember I said I’d answer almost anything…I’m not trying to be short or not take your question seriously. I do. I am and the president is, too, enormously sympathetic to what you all are going through.”

A man who identified himself as a fifth generation farmer from northwest Iowa said he harvested a “really good crop” last fall and hasn’t sold all of it on contract yet.

“Do you have a plan B or whatever to peddle these things someplace other than China?” the farmer asked.

Pompeo replied: “I don’t know that there’s a concrete solution to the question that you raise. I wish I could tell you: ‘Yes, we’ve got the markets identified. We know the price at which we can clear,’ but there are lots of ideas about how we might do that, ways that we might assist.”

Pompeo made the stop in Iowa at the urging of former Iowa Governor Terry Branstad, who’s now the U.S. Ambassador to China.

“I think it’s important to be able to share with the people of Iowa what’s being done on these very delicate, important issues,” Branstad told reporters after Pompeo’s remarks.

Pompeo suggested while it’s been hard to get China to agree to buy more American agricultural goods, the most difficult part of the negotiations has been about China’s theft of intellectual property. Pompeo said that includes stealing the secrets of hybrid seeds developed in the United States. Pompeo also told the crowd he expects the U.S. Mexico Trade Agreement to ratified by all three countries by the end of this year — hopefully bringing an end to the tariffs Mexico placed on U.S. pork.

“We’re trying to make sure we don’t fall down the same trap that American trade negotiators have done so many times,” Pompeo said. “We’re deeply aware of these retaliatory trade tariff issues and we know how much they affect you…Know they’re in the front of our mind.”

Pompeo told the crowd it’s an “enormous privilege” to serve in the Trump Administration and try to deliver on the promises Trump made during the 2016 campaign.

“It’s a wonderful thing to have this opportunity and then you all get to read his Twitter account, too,” Pompeo said, with a laugh.