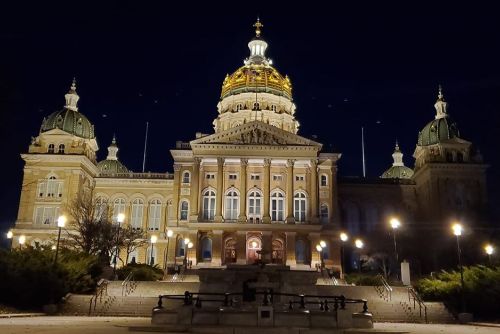 DES MOINES — Republican lawmakers are proposing an amendment to the Iowa Constitution, in response to Iowa court rulings that struck down abortion restrictions.

Republican Representative Steven Holt of Denison gave a loud Marine Corps “oorah” on Tuesday when Governor Kim Reynolds mentioned it in her Condition of the State message.

“When the Iowa Supreme Court struck down our 72-hour waiting period and our heartbeat legislation, they created a fundamental right to abortion in the Iowa Constitution that is subject to strict scrutiny, which is a higher standard even than is on the federal level, so I have deep concerns, as do a lot of legal scholars, that nothing we have in (state law) right now for protections may stand up to that,” Holt told Radio Iowa, “and we could even end up with taxpayer-funded abortion.”

A subcommittee in the Iowa Senate Thursday gave its approval to a proposed amendment that states Iowa’s Constitution does not “recognize, grant or secure a right to abortion.” Senator Jake Chapman, a Republican from Adel, said the amendment will over-rule the decisions of un-elected judges, “reigning in judicial judicial activism and so we’re very excited to get this across the finish line.”

If this year’s Republican-led legislature endorses the language, it must also be approved by the legislature sometime in the following two years. That means 2022 is the earliest Iowans could vote on the amendment. Chapman said voters will clearly understand what’s being proposed.

Critics like Reverend David Sickelka of the United Church of Christ in Urbandale said the amendment would set a dangerous precedent.

“I think that it is wrong-headed to focus on what rights are not in our constitution,” he said.

“This proposed constitutional amendment is one of the most extreme attacks on women’s health in Iowa history,” she said, “and if it passes would take away Iowa’s right to make the private health care decisions that are best for their own unique circumstances.”

The proposal cleared the first hurdle in the legislative process. It will now be considered by the Senate Judiciary Committee.