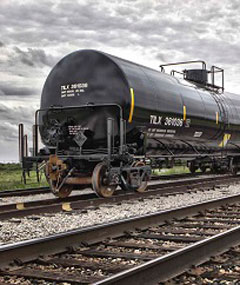 CLARKSVILLE — A Dallas, Texas based company specializing in railcar renovation and manufacturing plans to build a new plant near the Butler County town of Clarksville.

Clarksville Mayor Val Swinton says TrinityRail will build s largest location on 230 acres west of the Highway 3 ethanol plant starting in July.
“We’re very excited about this, they seem very responsible and a good-hearted company that wants to be responsible to our area,” according to Swinton.

The plant will start with 263 jobs and Swinton he says the company will plans to grow to 500 total employees. Most will be welders and painters. He says it will be a major investment for the town.  “It’ll impact us not only by pumping money into our local economy, but they’ll be looking for homes — these new workers who are coming in — so that’s going to affect our housing market,” he says. “Hopefully it’ll affect our schools. We’re hoping that there will be some younger people with kids that we can incorporate into our schools. So, hopefully it will have an overall very positive impact.”

TrinityRail’s websits says the company is North America’s leading manufacturer of railcars with the country’s largest fleet of 122,000 cars. They also provide parts, maintenance and investor services. Swinton says workers at the new Clarksville plant will renovate old railcars. “They’ll clean out the inside of the tank. Depending on what kinds of materials they haul they may put in a new lining. They’ll replace the wheels…things along that line. Wheels when they wear out after so many miles,” Swinton says.

He added Butler County was selected from 75 nation-wide options and then was narrowed to ten before being selected in part due to the nearby Iowa Northern Railroad. Swinton says the town of 1,300 has some work to do to prepare for the new company. He says the plant should be optional by next June.