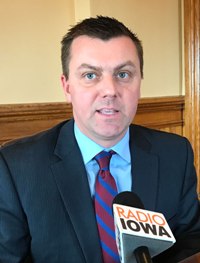 DES MOINES — Republican Governor Kim Reynolds and key Republicans in the legislature met yesterday and settled on a “per pupil” spending level for the 2019/2020 school year.

The state’s education community had been lobbying for more.

“While we appreciate that 2.06 percent is better than the rates that have been assigned that last couple of years, we know that school districts in Iowa need at least three percent to keep up with the cost of inflation,” said Melissa Petersen, a lobbyist for the Iowa State Education Association, which represents about 34,000 Iowa teachers.

Last year, the Republicans at the statehouse approved a one percent hike in per pupil state funding for the current school year. The previous year, the increase was 1.1 percent. Legislative leaders expect the GOP’s general school spending level for next year to gain final approval in the House and Senate next week.