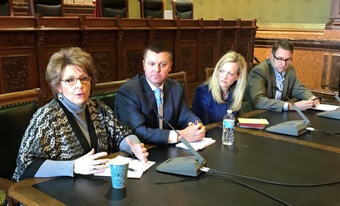 DES MOINES — Republicans at the statehouse are drawing up plans to change the make-up of the commission that nominates people to the governor for judgeships, in response to what they say is “judicial activism.”

Iowa’s Supreme Court legalized same-sex marriage in 2009 and recently overturned a GOP plan to require a three-day waiting period for abortions. Senate Majority Leader Jack Whitver, a Republican from Ankeny, said there are “a lot of people” who are frustrated.

“Over the last 20 years, there has been more and more judicial activism, where the Supreme Court justices are trying to legislate from the bench,” Whitver said yesterday during a forum organized by The Associated Press. “If they want to be legislators, run for the legislature. Otherwise, they should be interpreting the laws and the constitution as we give them, and so it’s just a matter of accumulation of dozens and dozens and dozens of activist ruling from the court, that you’re trying to curb some of that.”

Governor Kim Reynolds last year appointed her father to the panel that recommends district court nominees. It’s clear she and Republican lawmakers plan to target the attorneys appointed to the Judicial Nominating Commission by the Iowa State Bar Association.

“It’s about making sure it’s a fair process,” Reynolds said during a Radio Iowa interview. “When I interview judges, I don’t care what party they are, I want an individual who is going to uphold the law and not create it and so right now eight members of the commission are selected by the Bar.”

An amendment to the Iowa Constitutional set up a “merit based” system for judges on the district courts, court of appeals and Iowa Supreme Court. The Judicial Nominating Commission interviews candidates and submits three nominees to the governor, who must choose a judge from that list. Senator Whitver, who is an attorney, says the commission will be retained, but the way commission members are appointed is likely to change.

“Right now, there’s 16 members of that commission that select our supreme court justices. Eight are appointed by the governor and confirmed by the senate. Eight are voted on by attorneys and you must be an attorney and there’s no governor oversight or legislature oversight on that,” Whitver said yesterday. “And so, if you’re an attorney in the state of Iowa, that’s great. You have a much better chance of being on the Judicial Nominating Commission. If you’re not an attorney, your chances are very slim.”

Whitver told reporters the “general populace” should have “more say” than attorneys in deciding who gets to be an Iowa judge.

“It’s kind of a parochial system when you only have lawyers serving in those roles,” Whitver said.

Supporters of the present system say attorneys on the commission have valuable insight into how a prospective judge has operated in the legal system.

“The worst thing that we can do is politicize our judiciary. What problem are we trying to fix? I think accusing a merit-based judiciary of activism is unfounded,” House Minority Leader Todd Prichard, a Democrat from Charles City, said during yesterday’s AP forum.

Prichard, who is also an attorney, said Iowa’s judicial nominating system is a model for the rest of the country.

“I have friends who are lawyers in other states where they elect judges and I get very leery of these kind of ideas, because is that the kind of path we’re on, is to make these political appointments, political races,” Prichard said.