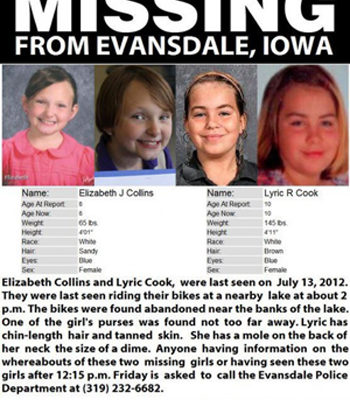 EVANSDALE, Iowa (AP) — A reward has been doubled to $50,000 for information leading to an arrest in the slayings of two Iowa cousins.

Cedar Valley Crime Stoppers said Tuesday the increase was possible because of a donation from a donor who wishes to remain anonymous. Waterloo Police Department investigator Brice Lippert coordinates the Crime Stoppers program, and he says the Crime Stoppers reward is separate from another reward being offered for a conviction in the case.

Lyric Cook and Elizabeth Collins were 10 and 8 when they disappeared in Evansdale on July 13, 2012. Their abandoned bikes were later located on a trail near Meyers Lake in Evansdale. Hunters found their bodies at Seven Bridges Park in rural Bremer County, about 25 miles from where they disappeared, on Dec. 5, 2012.