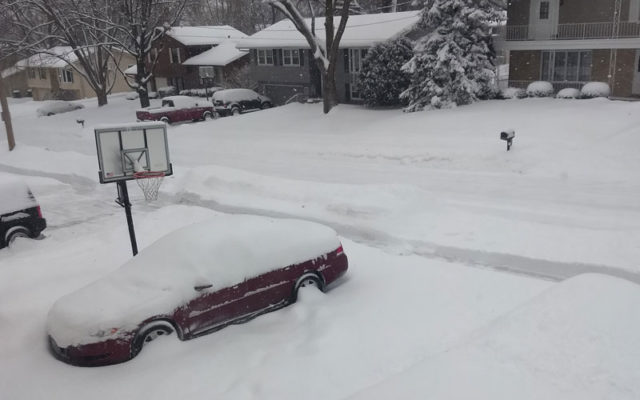 “The preliminary numbers have us at 22.5 inches of snow, averaging across the state, which would break the record set in 1962,” State Climatologist Justin Glisan announced this morning.

Having nearly two feet of snow fall in Iowa in February is not normal.

“In a given February, we typically get 6.8 inches over the 30 year average, so — yes — it’s a lot more snow than we tend to get,” Glisan told Radio Iowa.

The accumulation of snow during this winter season is setting records, too. Glisan said that’s remarkable because December temperatures were five degrees above average and the majority of precipitation that fell before the turn of the year was rain.

“It wasn’t until we got into January and then, especially, February when we started getting record snowfall,” Glisan said.

A snow pack was established early in the season with the blizzard after Thanksgiving in southern Iowa, according to Glisan. His data shows from southwest Iowa up through northeast Iowa there’s been between 30 and 40 inches of snow so far this winter.

“And then a very central part of the border between Minnesota and Iowa, there’s 50 to 60 inches,” Glisan said, “so some pretty big accumulations.”

As for what’s causing this snow cycle, Glisan points to what he calls the “arctic intrusion” in late January. That’s when temperatures dipped to the negative 30 and negative 40 range.

“We’ve been stuck after that in a very active polar jet pattern where we have every four or five days systems moving through the state dumping anywhere from three to six inches at a given time,” Glisan said, “and that pattern has just stuck onto the state for the last month.”

There’s a chance of light snow this weekend, but Glisan says the weather should be “relatively calm” across the state. A batch of arctic air will cause temperatures to dip at the beginning of next week, but Glisan predicts a “gradual warm-up” after that.