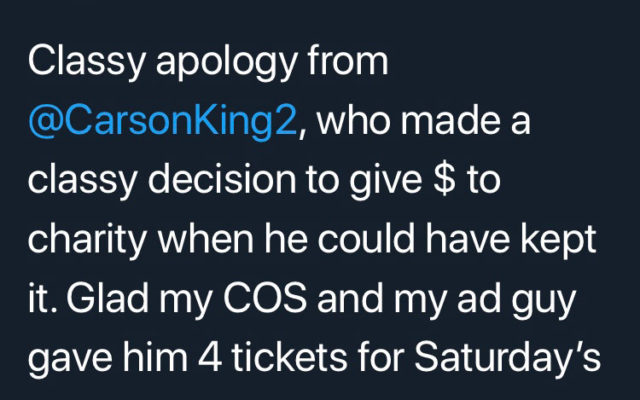 State Auditor Rob Sand says he’s glad his chief of staff and a campaign advisor gave 24-year-old Carson King tickets to Saturday’s game in Iowa City, so King can do “The Wave” to children in the hospital overlooking the field.

The state auditor uses the word “classy” to refer to King’s apology for two inappropriate tweets King sent when he was a high school sophomore. The tweets were unearthed by a Des Moines Register reporter doing a profile of King.

The news prompted Anheuser-Busch to announce it had severed ties with the 24-year-old, but the beer maker will follow through and make its donation to the hospital.

The controversy has erupted on Twitter, sparking several hashtags and prompting The Washington Post to do a story. State Representative Ashley Hinson, a Republican from Marion who’s running for congress, tweeted this morning that she’s donated to the hospital because of King.

Hollywood actor Tom Arnold, an Iowa native, tweeted to King that King did the right thing by “unconditionally” owning the mistake he made as a kid. Arnold told King, via Twitter, that he was a “quality man” for apologizing and Arnold suggested this has been a “teaching moment” for young social media users.”