State may respond to program shortfalls caused by federal shutdown 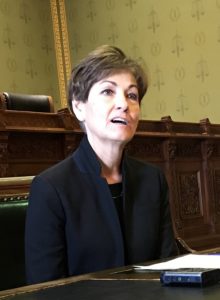 DES MOINES — State officials say if there is a prolonged shutdown of federal agencies like the USDA, they may shore up state programs run in conjunction with the federal government.

“I’m proud of the fact we do things differently here in Iowa. I think Iowans don’t like what they see happening out in Washington, D.C.,” Governor Kim Reynolds said Thursday at a statehouse forum organized by The Associated Press. “…They like the fact that, for the most part, two parties are able to work together to put Iowans first.”

Reynolds told reporters her budget director checks every day with state agencies that may be impacted by a federal government shutdown to ensure “essential services” are provided to Iowans.

“Right now, we’re in pretty good shape. We’re hoping that they can get something done,” Reynolds said. “Who knows, right now, what that looks like, but we’ll continue to monitor it.”

Legislative leaders say there’s no need for action now, but they’ll re-evaluate if the the federal government shutdown lasts for months. House Speaker Linda Upmeyer, a Republican from Clear Lake, said the election’s over, it’s time to get to work.

“I don’t want to speculate too far into the future,” Upmeyer told reporters at Thursday’s AP forum, “but we need people to get busy and solve their problems, find solutions, compromise and get this job done.”

House Democratic Leader Todd Prichard of Charles City said if the state eventually has to “fill voids” in federal spending, that may create budget headaches.

“I think the situation in DC shows the importance of Iowa having sound budgeting principles and practices and being in a position where we can deal with the unexpected,” Prichard told reporters at the AP forum,” whether it’s a federal shutdown (or) whether it’s a sudden downturn in the economy.”

The food stamp program is a joint state-federal program, run through the USDA, which is shuttered. The U-S Ag Secretary has said there’s enough money to provide benefits in February if the shutdown continues. Janet Petersen of Des Moines, the Democratic leader in the Iowa Senate, said if the shutdown lasts longer, state officials need to act.

“I can’t imagine that we wouldn’t assure Iowans that we will make sure they can put food on the table if things in DC are still going horribly wrong,” Petersen said during the AP forum. “Iowans deserve to know that they’ll be able to feed their families.”

The State of Iowa ended the last budgeting year with a surplus. Estimates indicate there’s a roughly $200 million  cushion in the current year’s state budget. That’s in addition to the state’s economic emergency funds.