HOUSTON (AP) — Justin Verlander pitched eight dominant innings, and Carlos Correa, Michael Brantley and Josh Reddick all homered to lead the Houston Astros to a 7-1 win over the Minnesota Twins. Verlander retired the first 10 batters before Jorge Polanco homered in the fourth inning for the lone Twins run. Verlander retired 11 of the last 12 batters he faced. He gave up one run and four hits while striking out eight to win his seventh straight decision dating back to last season.

MARSHALLTOWN — Marshalltown scored three runs in the bottom of the eighth to edge NIACC 11-10 in non-conference baseball Wednesday afternoon. Ross Cochran was 5-for-5 with a homer, three runs scored and two runs batted in. Fox Leum had a homer and three RBI, while Jacob Hansen also knocked in a pair of runs. The Trojans jumped out to a 6-0 lead after two innings but struck out 16 times at the plate in the loss. NIACC is 20-21 overall and will host Iowa Central in a four-game series this weekend. The series has been adjusted, with Saturday’s games being moved to Friday with the doubleheader starting at 4 o’clock. Sunday’s doubleheader at Roosevelt Field is scheduled for 1 o’clock.

IOWA FALLS — The NIACC softball team picked up a conference doubleheader sweep at Ellsworth on Wednesday afternoon. The Lady Trojans used a five-run fifth in the opener to get an 8-0 five-inning win. Kristen Peka fired a no-hitter, striking out ten. Morgan Kelley had a bases-clearing double while Kaci Sherwood had a homer and two runs batted in. NIACC also took the nightcap 6-0. Kylie Sherwood had a one-hit shutout from the circle, striking out three. Kaci Sherwood had three more runs batted in while Hannah Faktor was 2-for-5 with an RBI, two runs scored and two stolen bases. NIACC improves to 23-13 overall and 15-5 in the conference. The Lady Trojans were scheduled to travel to Marshalltown today but that doubleheader has been cancelled. NIACC is scheduled to host Southwestern on Saturday and DMACC on Sunday, both days being doubleheaders that start at noon.

== Enke is Clear Lake’s all-time leader in pass receptions and receiving yards with 92 catches for 1568 yards. Enke says after looking at a couple of schools, heading to UNI felt like the right decision.

Enke will likely redshirt and feels like he can fit into being part of the Panther passing game.

== Storbeck this past season had 179 yards receiving as a tight end and led the Lions in tackles. He says he loves the UNI campus and will find a place to contribute whether it’s on offense or defense.

Storbeck and Enke will join Jared Penning, who signed with UNI back in December, as well as current Panther Sean Wendel on campus next fall.

== Stuver was Clear Lake’s second-leading tackler and now is heading to a Waldorf program that has had a 15-8 record the last two seasons, including an 11-4 two-year mark and back-to-back second place finishes in the North Star Athletic Association. He says there’s a chance he may be able to crack into the lineup right away as a middle linebacker.

Stuver says his time at Clear Lake has helped prepare him for college football.

== Clear Lake coach Jared DeVries credits the hard work of the players in their advancement to the next level.

Listen  back to our full interviews with each player and DeVries below: 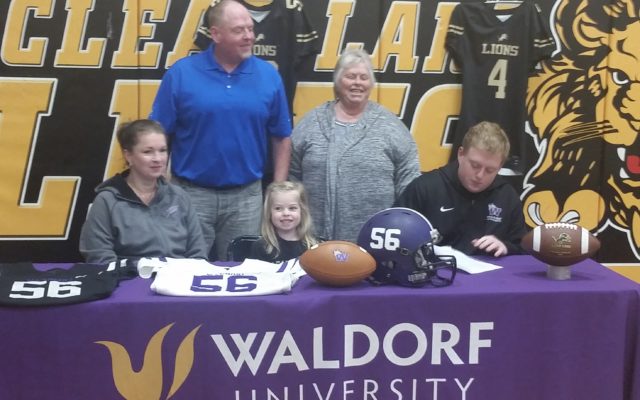 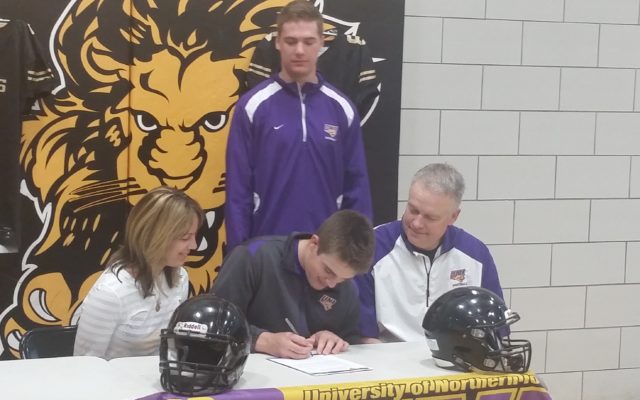 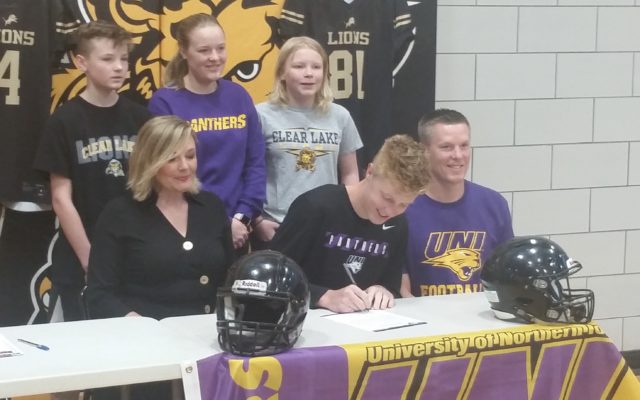 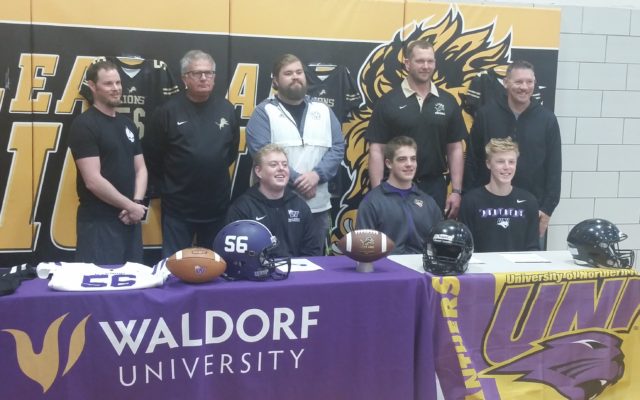 NASHVILLE — The NFL Draft begins tonight and it could be a big evening for a pair of Iowa standouts. Noah Fant says he goes into the draft not knowing where he will end up.

Considered a tough matchup in the pass game Fant used the combine and workouts to show he is also a good blocker in the run game.

Fant says he has had no trouble ignoring all the mock drafts.

TJ Hockenson was the Mackey Award winner and is considered a likely top 10 selection. Wherever he ends up Hockenson says he is ready for football to become his job.

Hockenson will be in Nashville for the draft and is ready to have it over with.

Hockenson says once the draft is over the focus changes.

The NFL Draft is being held in Nashville over the next three days.

DES MOINES — Iowa basketball star Megan Gustafson was in the House AND the Senate Wednesday as Iowa legislators passed resolutions recognizing her achievements.

Senator Joe Bolkcom of Iowa City read some of the stats from Gustafson’s senior year. “She became a consensus first team All American,” Bolkcom said,”…and became the 4th player in women’s basketball history to score a thousand points in a single season.”

Lawmakers read through the many awards Gustafson won and also praised her for being a two-time Big Ten Academic All-American. Senator Zach Wahls of Iowa City read the closing lines of a resolution honoring Gustafson . “The Senate hereby recognizes and congratulates Megan Gustafson for her outstanding career at the University of Iowa and wishes her continued success during her Women’s Basketball Association career,” Wahls said.

The same document was read aloud in the House. Gustafson got long ovations from lawmakers, their staff and visitors watching the proceedings. It was announced on Wednesday night at the Iowa women’s basketball team’s season-end celebration that Gustafson’s jersey number 10 would be retired during a ceremony at a later date.