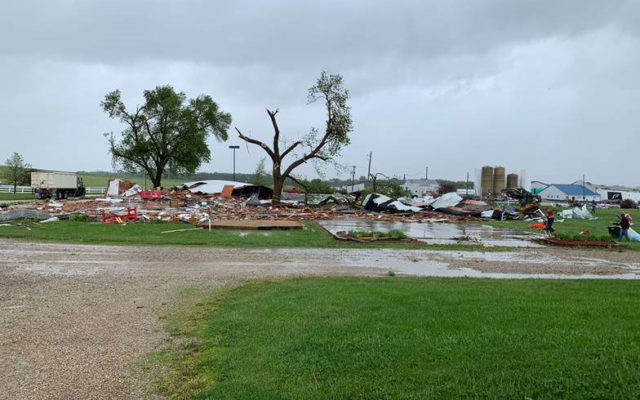 CHARLES CITY — While the Floyd County Fairgrounds in Charles City lost half of its buildings during a Memorial Day tornado, fair board president Amy Staudt says the show will go on next month.

“I am sure that our Floyd County Fair will be running, July 17th through 21st,” Staudt says. “We might be short a couple shows here and there, but for the most part, we’ll still have all of our activities, our entertainment, our Aussie Kingdom is still coming, our carnival will still be here.” At a fair board meeting Sunday night, members discussed plans to ensure the fair’s activities wouldn’t be hindered despite losing vital several structures.

Staudt says the twister totaled four buildings, including one that hosted the chicken and rabbit exhibits.  “We’re leaning towards bringing their entries in for check-in on their show day, we’ll complete the show and then we’ll release those species to go home,” she says, “just because of heat and a building that will not be properly cared for, for the animals.”

The sheep and goat barns were relatively untouched by the twister. The livestock arena wasn’t a total loss, but the damage must be surveyed by a engineer before anyone is able to use it.  “We should have that up and running before the fair,” she says. “If he would say it’s structurally unsafe, then we’ll have to go to Plan B which may be using the horse area or bringing livestock in just for that showtime and then hauling them back out.” Excavation of debris is getting underway today (Monday) after a week-long volunteer effort to clean up the destruction.

Staudt says there will be an August meeting where board members will discuss long-term reconstruction. “We’re planning for the future as we’re looking at set-ups, barn flow, different things like that,” she says. “We want to make sure it’s got a good flow to it for years to come.” Parts of the fairgrounds remain unscathed, like the race track where Figure Eight races will begin Friday night.