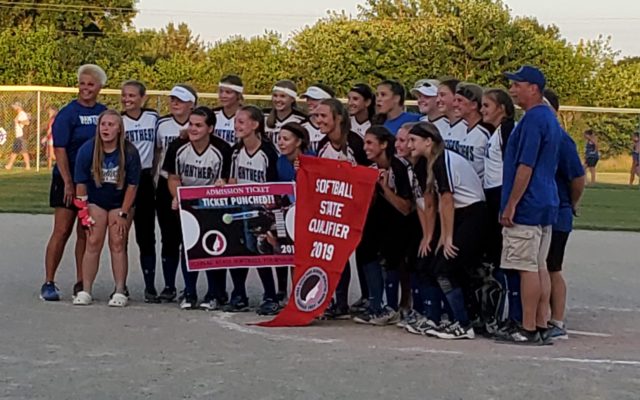 MANLY — Central Springs socked four home runs on their way to a 6-0 win over East Sac County in the Class 2A Region 5 championship game as you heard on KRIB last night, punching their ticket to the state softball tournament for the fifth straight year and sixth time in the program’s history. After a scoreless first three innings, Lizzie Hamand and Hannah Ausenhus hit back-to-back homers to lead off the fourth. Abigail Angel and Emme Dietrich also hit homers in the sixth inning. Central Springs coach Belinda Nelson says she was confident her hitters would step up during the second time through the lineup.

The Panthers added to their Class 2A-leading homerun total, now having 45 for the season. Nelson says those homers have come from almost every spot in the lineup.

Nelson says she’s proud of her seniors who now have qualified for the state tournament in all five of their seasons.

Central Springs improves to 28-7 on the season and will be the third seed in the 2A state tournament. They’ll face sixth-seed Alta-Aurelia at 5:30 next Monday night at the Harlan & Hazel Rogers Sports Complex in Fort Dodge.

TROY MILLS — St. Ansgar’s seventh-inning rally fell short, falling to top-ranked North Linn 5-3 in a 2A regional final last night. North Linn led 5-0 heading into the 7th before the Saints scored three times in the seventh before Abby Flanagan struck out the last two batters. St. Ansgar finishes with a record of 25-8, one win away from the school record for wins.

CHARLES CITY — Mason City faces 4th-ranked Charles City in a 4A regional final tonight at Sportsmen’s Park in Charles City. The Mohawks rallied from six runs down to beat 15th-ranked Webster City in the regional semifinal on Saturday night, while the Comets had little problem with Waterloo East 6-0 in their regional semifinal. Mason City comes in with an 18-21 record, with 17 of those losses coming against Class 5A teams. Mohawk coach Bob Horner believes playing a tougher schedule will benefit his team in games like tonight.

— District baseball continues tonight with Class 1A and 2A district semifinals:

ARLINGTON, Texas (AP) — Big 12 Commissioner Bob Bowlsby says there is no discussion at any level about expanding the 10-team league. Bowlsby began the league’s football media days talking about the successes of the smallest Power Five conference. That includes increasing revenue and new media opportunities. Bowlsby says the league likes its 10 schools and that won’t be an active topic within in the conference in the foreseeable future.

DENVER — Decorah native and former Iowa All-American linebacker Josey Jewell is ready for his second training camp with the Denver Broncos. Jewell made nine starts in his rookie season and finished with 53 tackles while also playing on special teams.

It will be his second season with a new coaching staff. Vic Fangio took over as head coach and Ed Donatell is the new defensive coordinator after the Broncos posted a 6-10 record last season.

Jewell says under the new system the Broncos will try to disguise their defense more often.

The Broncos will be out to make the playoffs for the first time since winning the Super Bowl after the 2015 season.

The Broncos open exhibition play against the Atlanta Falcons in the Hall of Fame Game on August first.