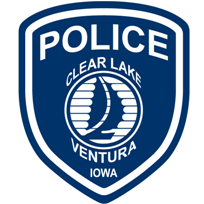 Clear Lake Police Chief Pete Roth says 38-year-old Eric Anderson and 59-year-old Leroy Lomholt were arrested on a charge of harboring a runaway against the wishes of a parent.

Both were booked into the Cerro Gordo County Jail and were being held on $2000 bond. The missing juvenile is safe and was reunited with her family.

Roth says the incident remains under investigation and no further information will be released at this time.