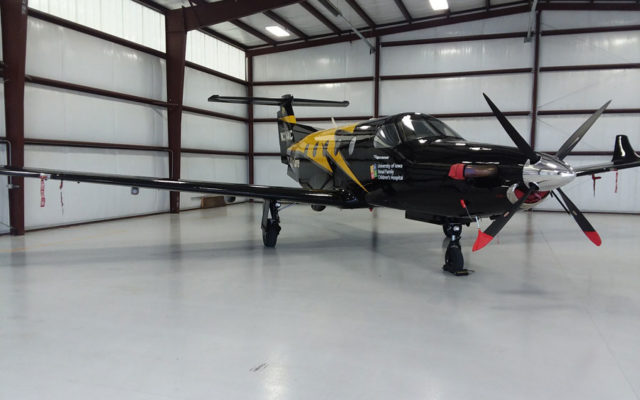 “Our helicopter has a range of about 150 miles and we found that between that and weight restrictions and weather — it was kind of tough to get to all the patients that really wanted to come see us,” Nugent says. Doctor Nugent says the propeller drive airplane has a range of some 700 miles, and holds a bigger payload.
*
[dd215uiplane2] :07 :the university”
*
(as said)”We can take extra people and handle patients that have more acute illnesses, so they can come all the way to the university,” Nugent says. He says the airplane costs about the same as the helicopter to operate. It gives them an option for a different type of patient.

“We’re looking for people who have been stabilized and need to be transferred to a tertiary center, ” according to Nugent.”Whereas the helicopter will a lot of times take patients who are actively needing resuscitation or intervention that maybe needs to happen on a much faster basis. But most of these patients that we’re moving with the airplane, we can take to the airport, we can transfer back to the hospital safely, and then care for them at the university.” Nugent says they expect the plane to be busy — and not just with flights to Iowa City.

“We’re hoping that it’ll be used several times a week. And it won’t just be used by the university. There’s been a lot of demand for it to be used throughout the midwest. Some the Des Moines hospitals want to use it, Omaha,” he explains. “There really isn’t a lot of options right now for critical transport fixed wing.” He says they also have plenty of need at the U-I.

“I think the primary focus for the first year anyway is going to be neo-nate runs — moving sick babies. But we can definitely move I-C-U patients as well,” Nugent says.
The black and gold colored hospital plan joins the helicopter service which began transporting patients in 1979.