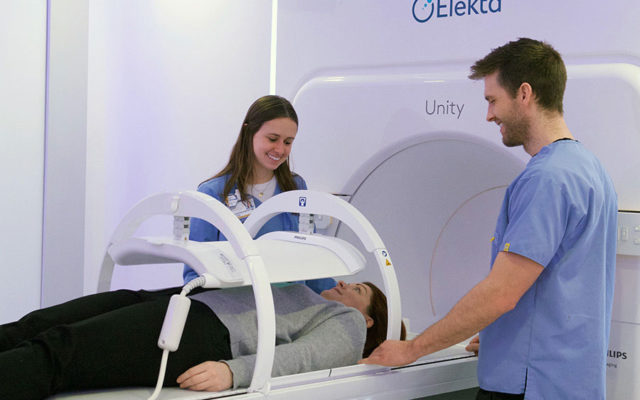 IOWA CITY — A new type of radiation therapy is now being used to treat cancer patients at University Hospitals in Iowa City, one of only three sites in the nation to have the technology.

It’s called the MR linac device and U-I medical physicist Dan Hyer says it uses real-time imaging to very accurately target cancer cells with high radiation doses. “In the previous setting, we would put a margin around the target to make sure that we were accounting for any variations day-to-day,” Hyer says. “With this new device, we should be able to reduce those margins, which in turn, allows us to treat the tumor and less surrounding, normal tissue, so we should have less side effects for the patients.”

By delivering higher doses of radiation more precisely, he says cancer cells can be killed with greater efficiency, meaning fewer visits are needed. A typical prostate cancer patient may have to undergo 40 or more radiation therapy treatments. “With this machine, we’re hoping to get it down to as low as five visits to the center overall,” Hyer says. “That’s a huge advantage to a lot of Iowans who travel a long distance to come into our center. We’re able to do this because we can reduce those margins and really hone in on just the tumor itself.”

The U-I oncology team is using the device initially for prostate and brain cancer therapy, though future applications will include moving targets in the abdomen, such as tumors in the pancreas, liver, and lungs. “That’s where our MRI scans can really help us delineate just the tumor and because we’re able to acquire images continuously throughout the treatment, we can actually even account for the motion,” Hyer says. “As you breathe, we can see how the tumor is moving and actually account for that motion in your treatment. ”

The MR linac is two technologies combined, a traditional MRI and a linear accelerator. Hyer says it’s that combination that allows them to zero in on the target in real-time.