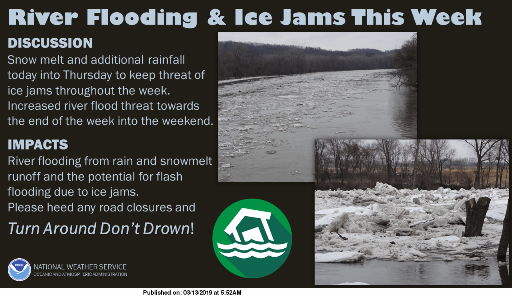 Meteorologist Brooke Hagenhoff at the National Weather Service says there are flood watches and warnings all across the Iowa map and some roads are already barricaded off due to the high water.  “We’ve got several areas that are forecast to go into either minor or moderate flooding,” Hagenhoff says. “Luckily, we’re not seeing that quite yet, other than in a few locations, but definitely with the continued snowmelt that we’re seeing and extra rainfall today, it’s only going to enhance that.”

Some waterways in southwest Iowa and across much of eastern Iowa have already seen water levels double in the past 24 hours. “The areas we’re really most concerned about are where we’re looking at ice jam potential,” Hagenhoff says. “Those can be especially hazardous just because they can happen fairly quickly with rapid rises and you don’t get a lot of warning.”

Indianola and Ottumwa had flash flooding due to ice jams on Tuesday. Other areas of particular concern for ice jams include Marshalltown, Fort Dodge, Van Meter and north of Waterloo. The forecast calls for much warmer weather today with high temperatures in the upper 40s in northern Iowa to near 60 in southern Iowa. Hagenhoff says there’s still deep snowpack in parts of the state. “We’re pushing ten to 15 inches across portions of northern Iowa,” Hagenhoff says. “Those areas will be a little cooler today but certainly, we’re expecting to see quite a bit of snowmelt all the way through central Iowa. Southern Iowa has seen a lot of melting already and in many cases, their snowpack has completely disappeared.”

The National Weather Service is again posting warnings to motorists approaching flooded waterways, telling them to “Turn around, don’t drown.”  “The biggest thing is just to be aware,” she says. “If you can’t see the road through the water, it’s probably a good idea to just turn around and find a different route. You never know how deep it is or what the road conditions are like under that water.” Even in areas where the snow is already long gone, Hagenhoff says there’s concern about flooding as waterways are swelling with runoff from snowmelt upriver.