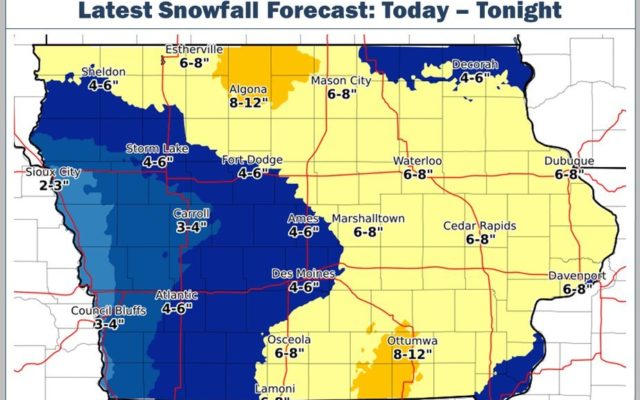 For the most up to date winter storm statements click here

MASON CITY — Winter was late in arriving to many areas of Iowa, but snow and colder temperatures are once again in the forecast for the state.

National Weather Service meteorologist Jim Lee says a significant storm system will spread from northwest to southeast Iowa throughout the day today. “We’re looking at amounts generally in the 4-to 7-inch range. Some places will be a little bit higher and lower, but a pretty good accumulating snowfall,” Lee says. Much of southern Iowa received 5-to 12-inches of snow last weekend.

Lee says This approaching storm will be more dangerous, primary because of high winds that could reduce visibility for motorists and turn roads slick. “We’re looking at winds probably in the 15 to 20 mile an hour range with gusts to around 30 at times, maybe even a little bit higher,” Lee says. “So, there will be considerable blowing and drifting of snow that we didn’t see much last time.”

Another difference involves the timing of this event. Most of the snow that fell last weekend arrived overnight Friday into Saturday. “For much of the state, this one will start during the day on Friday and will affect travel more – particularly the Friday afternoon commute in a lot of areas,” Lee says. Much colder air will follow the snow with temperatures dropping into the single digits on Saturday.

“And the wind chills will be well below zero across the entire state,” Lee says. “On Sunday morning they should bottom-out roughly in the 10-to 15-below zero range across most of Iowa.” High temperatures on Sunday may not climb above zero in some parts of the state. A slight warmup is expected on Monday and Tuesday with highs reaching the teens and 20s.