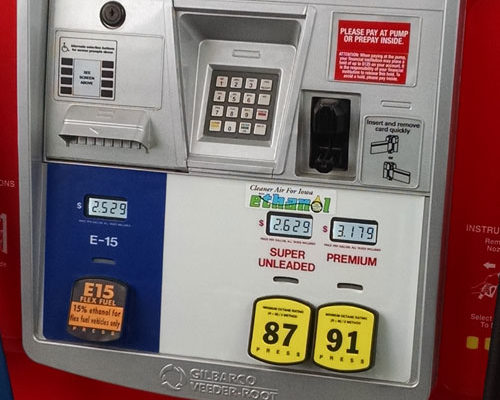 Iowa’s gasoline prices continue to be among the lowest in the country, according to Mark Peterson with Triple-A Iowa.

“Today, the average price per gallon in Iowa is at $2.45 and the national average is $2.65,” Peterson says. “What’s interesting is if we compare that to last year at the same time, in Iowa, a gallon would cost you $2.73.” While there’s still more than a month of summer left, the summertime driving season is coming to an end with the start of school. Still, Peterson says there’s an unusual trend starting to emerge in gasoline sales.

“Demand just started picking up in the last few days, over the weekend,” Peterson says. “Maybe some people are just trying to get that vacation in toward the end of the year, but we’re starting to see a bit of a change in demand but the prices are still staying down, which kind of surprises us.” Based on the boost in demand, simple economics dictates we should soon see a corresponding boost in prices.

“There’s still a lot of things out there that have an impact that we have no control over,” Peterson says. “Some unresolved tensions in the Middle East have contributed to some of the prices and that situation could change very quickly. It wouldn’t be unreasonable to anticipate that affecting gas prices across the state.”

The daily Triple-A survey finds the cheapest gas in Iowa is being sold in Sioux City at $2.35 a gallon while the most expensive gas is in Dubuque at $2.62.