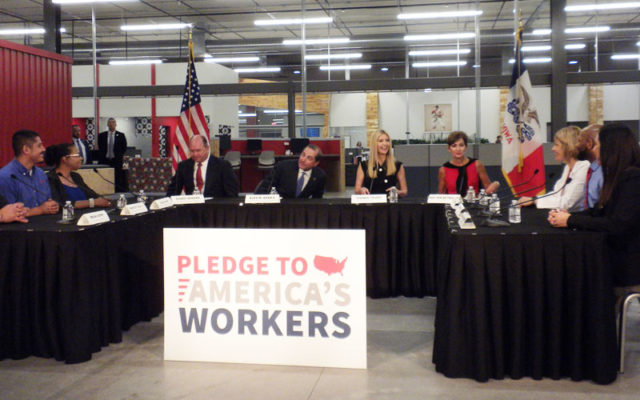 GRIMES — The U.S. Health and Human Services Secretary and advisor to the president, Ivanka Trump, joined the governor for a tour of the Hy-Vee Innovation Center near Grimes Friday to see how the company is expanding and retaining its workforce.

HHS Secretary Alex Azar, says the tour is part of America’s Workers Month. “It’s the one-year anniversary of the launch of the Pledge to America’s workers. This is an extremely important initiative — and it’s one that everyone across the Trump Administration cold not be more proud of,” Azar says.

He says the goal is to bring more support to workers. “Supporting workers means everything from getting that first job to upscaling,” Azar says, “providing childcare and parental leave and other needs, all of which are focuses of the administration’s cross agency council on economic mobility.”

Ivanka Trump says part of the effort is getting workers who have  “In the last quarter — of all the new jobs secured in America — 74% of those new jobs went to people who are outside the formal economy. Not even on unemployment. They were literally on the margins and they came into the workforce,”Trump says.

She says there are several reasons for the increase in people coming into the workforce. “Because wages are up, because there’s opportunity, because companies such as Hy-Vee are getting creative and they’re hiring. And they are reaching out to populations that been marginalized and are providing them pathways to creating career success,” Trump says. 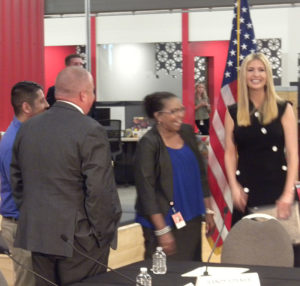 Ivanka Trump talks with Hy-Vee employees after the event.

Iowa has one of the lowest unemployment rates in the country and Trump says that has led the state and employers like Hy-Vee to do more in seeking out new workers. She says there has been a lot of success. “The rate of unemployment for disabled American is at the lowest level in the history of our country. So we are creating growth that benefits all — we are just at the beginning of that and it’s exciting to be out here in Iowa and West Des Moines to really see it on a personal level,” according to Trump.

Governor Kim Reynolds says the state is involved in partnership with Hy-Vee and other companies in several programs to help grow the workforce. “The workforce continues to be a top priority, it’s one of our biggest challenges in this state to really see the economy grow, at the capacity that we have. But it is also one of the biggest opportunities that we can provide to Iowans and people coming to the state,”Reynolds says.

She says there are plenty of jobs of all types they would like to fill. “Right now if you go onto the Iowa Workforce Development website, we have 82,000 jobs open in the state of Iowa today, and that’s across the sector. And again that’s a ton of opportunity,” Reynolds says.

Trump and the governor heard from Hy-Vee employees about the training programs within the grocery store chain that allows employees to start and build their careers.