“As I traveled the state last week, I saw lots of farmers getting into the field and the co-ops are reporting that spring activities are ramping up quickly,” said Iowa Secretary of Agriculture Mike Naig. “With warmer temperatures on the way, we expect farmers to start planting this week.”

Iowa farmers were waiting for warmer weather and drier conditions as snow, ice and rain throughout the State prevented much fieldwork during the week ending April 14, 2019, according to USDA’s National Agricultural Statistics Service. Statewide there were 1.9 days suitable for fieldwork. Southwest Iowa had the most days suitable for fieldwork at 4.1 days. Fieldwork activities remained mostly limited to applying anhydrous and spreading manure with very little planting done.

Pastures continued to green up slowly with very little livestock placed on pasture ground. Overall, livestock and feedlot conditions have improved. However, in the Northwest District there were reports that recent weather conditions stressed livestock and caused respiratory issues.

Iowa’s northeastern half was wetter than normal while the southwestern half was unseasonably dry for the reporting period. Temperatures were a few degrees below average in northern Iowa with near to slightly above normal moving south.

The week started off warm with highs on Monday (8th) reaching into the mid to upper 70s across much of Iowa; lower 80s were reported in southwestern Iowa. On Tuesday (9th) rain showers formed across a northwest to southeast swath of Iowa. Over 40 stations reported totals between 0.50 – 1.00 inch; Marshalltown (Marshall County) observed 1.04 inches. Wednesday (10th) began a stretch of active weather statewide. Showers and a few thunderstorms gradually moved through northeastern Iowa and out of the state late afternoon. As the day progressed, a strong Colorado low pressure moved towards Iowa bringing very windy conditions to the region. Isolated severe storms raced out of southwestern Iowa overnight into Thursday (11th) with a few reports of hail and high winds.

Much of Iowa’s northern three-quarters received measurable rainfall; two-day totals were highest in northwest Iowa with many stations reporting between 1.00 to 1.50 inches. Cooler and continued windy conditions were reported on Friday (12th) as cold air moved into Iowa behind the exiting low.

Daytime highs were 15 – 20 degrees below average, generally in the upper 30s into the mid 40s. A relatively quiet pattern set up over the weekend. Highs on Saturday (13th) varied from the 40s in the north to mid 50s across the state’s southern third. Overnight lows into Sunday (14th) were in the mid to upper 20s. Red Oak (Montgomery County) and Shenandoah (Fremont County) observed the week’s high of 81 degrees on the 8th.

Little Sioux (Harrison County) reported a low of 18 degrees on the 14th. Dubuque Lock and Dam (Dubuque County) reported the highest rainfall total of the week at 1.85 inches. Four-inch soil temperatures were in the low to mid 40s north to south as of Sunday. 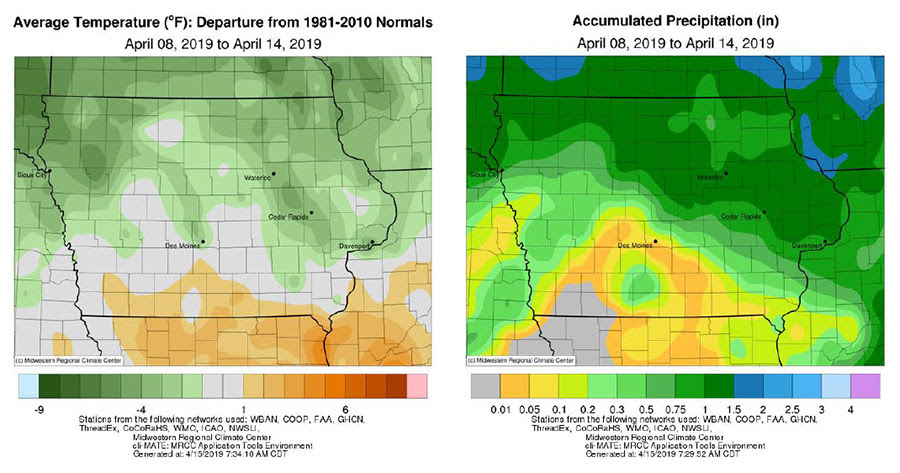