“Farmers across most of the state enjoyed several days of near-perfect weather last week,” said Secretary Naig. “Corn development is in various stages. The earliest planted corn is almost done pollinating, while some fields that were delayed because of wet spring conditions are just starting to tassel.”

This past week brought below average temperatures and little to no rain across much of the state as Iowa farmers had 5.9 days suitable for fieldwork during the week ending July 28, 2019, according to the USDA, National Agricultural Statistics Service. Fieldwork activities included scouting, spraying fungicides and insecticides, and harvesting hay and oats.

Iowa experienced a less active weather pattern during the reporting period with multiple days in which rainfall was largely absent from the state. With less thunderstorm activity, unseasonable dryness was reported across the state. Cooler than normal conditions also prevailed with average temperatures up to five degrees below normal in western Iowa. The statewide average temperature was 71.9 degrees, 1.5 degrees below normal.

Showers and isolated thunderstorms pushed out of Iowa through the rest of Sunday (21st) and into the overnight hours. Light but measurable rain fell across parts of western and southern Iowa, where totals were highest; Red Oak (Montgomery County) reported 0.32 inches while Rathbun Dam reported 0.18 inches. High temperatures were generally in the 70s with a statewide average high of 78 degrees, six degrees below normal.

Unseasonably cool temperatures continued into Monday (22nd) under clear conditions and northerly flow. Dry conditions also prevailed as high pressure dominated. Overnight lows into Tuesday (23rd) dipped into the mid-50s, up to 12 degrees cooler than average. Dry and pleasant conditions continued through the day under partly cloudy skies. Highs reached the upper 70s and low 80s, continuing the unseasonable coolness; there were no reports of measurable rainfall. Wednesday (24th) was a rain-free day across the state as temperatures started to approach more seasonal values; eastern Iowa reported highs in the mid-80s while western Iowa was two to four degrees below average.

Friday (26th) saw temperatures rebound with a southerly wind and clear skies. Dry conditions also prevailed into Saturday (27th) for much of the state, though a narrow band of thundershowers extended from central to eastern Iowa, generally along the I-80 corridor. The northwest quadrant of Iowa also reported showers in advance of a cold front. Rainfall totals at 7:00 am on Sunday (28th) ranged from 0.03 inches at Sioux City (Woodbury County) to 0.36 inches in Traer (Tama County). Daytime highs on Saturday were in the mid to upper 80s with a statewide average of 88 degrees, four degrees warmer than normal. 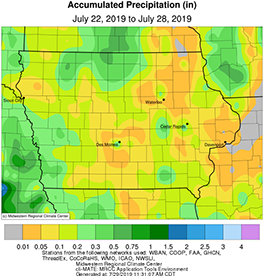 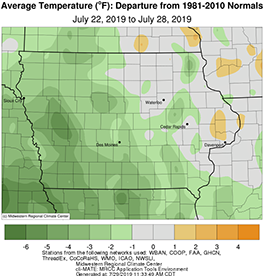