“Much of Iowa experienced its first hard freeze over the weekend, marking the end of the growing season,” said Secretary Naig. “With an outlook that includes sun, seasonal temperatures and wind, farmers should be able to make good progress in the fields this week.”

In addition to the first freeze of the season, Iowa experienced drier weather this past week; however, wet field conditions remained an issue for farmers as they were limited to 3.1 days suitable for fieldwork during the week ending October 13, 2019, according to the USDA, National Agricultural Statistics Service. Field work activities included chopping silage and harvesting hay, seed corn, soybeans and corn for grain.

Nearly all of the corn crop has reached the dented stage or beyond at 97 percent statewide, with 72 percent reaching maturity, 3 weeks behind last year and 15 days behind average. Seven percent of corn has been harvested for grain, 18 days behind last year and nearly 2 weeks behind average. Corn condition remained unchanged from the previous week at 65 percent good to excellent.

The third cutting of alfalfa hay reached 92 percent, over 3 weeks behind average. Pasture condition rated 45 percent good to excellent. Livestock have dealt with large temperature fluctuations the past 2 weeks and feedlots remain muddy.

The first full week of October was unseasonably wet across much of central and southwestern Iowa with general precipitation departures ranging from 0.25 inches to 1.25 inches. Swaths of northwestern and eastern Iowa reported anywhere from 0.25 inches to 0.50 inches below average precipitation. Cooler than normal conditions also prevailed statewide with majority of the state experiencing the first freeze of the season. The statewide average temperature was 49.1 degrees, 3.8 degrees colder than expected.

Light showers moved through extreme southeastern Iowa during Sunday (6th) afternoon with only a handful of stations reporting between one to two tenths of an inch. Mostly sunny conditions were observed across the rest of the state. High temperatures were in the low to mid 60s with a light westerly wind. Overnight lows were near to slightly cooler than average, generally in the low to mid 40s. Monday (7th) was warm and pleasant with highs reaching into the upper 60s and low 70s under clear skies. A high pressure center over Missouri allowed these conditions to continue into Tuesday (8th), though temperatures were slightly warmer as winds shifted to a southerly direction. The statewide average high was 70 degrees, five degrees above normal. Wind speeds increased throughout the day, ranging from 15 to 25 mph with gusts up to 35 mph across northern Iowa. Temperatures into Wednesday (9th) morning fell into the low to mid 50s, on average three degrees above normal. The weather pattern began to shift through the afternoon as a strong low pressure system over the Dakotas continued to move through the Upper Midwest. Showers and thunderstorms slowly moved into western Iowa during the evening and expanded across much of Iowa’s eastern half. Waves of rain continued across the state into Thursday (12th) with the low pressure gaining strength over Minnesota as the attendant cold front slowly moved across Iowa.

Stations across Iowa’s northwestern quadrant began registering the first freezing and below freezing temperatures of the season during the morning hours of Friday (11th) as the cold front continued to push out of Iowa. Precipitation totals topped 1.00 inch at over 20 reporting sites with a gauge in Churdan (Greene County) observing 1.81 inches; the statewide average was 0.33 inches. Brisk easterly winds and cloudy skies held daytime temperatures in the mid 30s across northern Iowa into the low 40s across the south with the average statewide reading at 41 degrees, 23 degrees below normal. Windy conditions continued throughout the night and into Saturday (12th) morning with gradually clearing skies. Without cloud cover, low temperatures plummeted into the upper 20s and low 30s, producing the first widespread killing freeze of the season for much of Iowa. At 29 degrees, the average low temperature was 11 degrees below normal. The first snowflakes of the season were also reported in northern and eastern Iowa with Swea City (Kossuth County) reporting two inches of snow. Multiple stations also reported a trace to 0.80 inches in Sanborn (O’Brien County). Lows into Sunday (13th) rebounded slightly from the previous night, ranging from 27 degrees at stations in northern Iowa to 37 degrees in Cedar Rapids (Linn County); the statewide average low was 30 degrees.

Weekly precipitation totals ranged from 0.02 inches at Dubuque Regional Airport (Dubuque County) to 2.60 inches in Coon Rapids (Carroll County). The statewide weekly average precipitation was 0.72 inches, 0.12 inches above normal. The week’s high temperature of 74 degrees was reported on the 7th in De Soto (Harrison County) and on the 8th at Spencer Municipal Airport (Clay County), nine degrees above average. Holstein (Ida County) and Shagbark Hills (Woodbury County) reported the week’s low temperature of 26 degrees on the 12th. This reading was on average 14 degrees below normal. 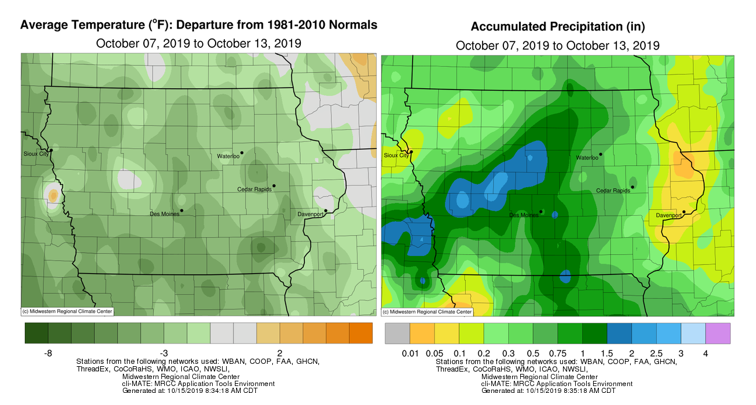