“Harvest is off to a slow start since much of the state received heavy rainfalls this weekend,” said Secretary Naig. “We need several consecutive days of dry conditions and seasonal temperatures to give farmers time to make significant progress in their fields.”

Excessive rainfall throughout Iowa limited farmers to only 1.6 days suitable for fieldwork statewide during the week ending October 6, 2019, according to the USDA, National Agricultural Statistics Service. Very little harvesting took place this past week as farmers wait for field conditions to improve with drier weather.

Iowa experienced a very wet reporting period as a stagnant pattern over the upper Midwest brought above average rainfall across the entire state. Much of Iowa experienced unseasonable warmth though cooler than average conditions were present in the state’s northwestern corner. At the warmest, temperatures were six degrees above normal with the statewide average temperature at 57.9 degrees, 1.5 degrees warmer than expected.

Rain continued through the day on Sunday (29th) as a warm front moved north across Iowa. Daytime highs ranged from the mid 70s in the southwest quadrant to mid 60s across northern Iowa. Monday (30th) was unseasonably warm with southerly winds and mostly sunny skies. Highs reached into the upper 80s with a few locations in the low 90s; the statewide average high was 86 degrees, 17 degrees warmer than normal.

Multiple rounds of showers and thunderstorms moved through Iowa on Tuesday (1st) leaving multiple reports of severe weather. A weak, short-lived EF-0 rated tornado was reported in Shenandoah (Page County). There were also several reports of large hail in Polk County, varying in size from a quarter to a golf ball. Northeastern Iowa experienced severe straight-line winds as the front moved through during the late evening hours. Measurable rain was reported across a majority of Iowa with almost 90 stations reporting over two inch totals and two stations in Poweshiek County reporting over four inches. The statewide average total was 1.31 inches.

Rain showers and a few thunderstorms moved through Iowa on Wednesday (2nd), leaving measurable amounts statewide. Totals were in the general range between 0.25 and 1.00 inch. Highs ranged from the low 60s in the south to mid 50s in the north. As the system moved out winds shifted to a northwesterly direction as a high pressure center propagated into the Midwest, creating cool conditions on Thursday (3rd). High temperatures were in the mid 50s to low 60s with the average high of 57 degrees, 11 degrees below normal.

Friday (4th) remained cool under mostly sunny skies with a light wind out of the east. High temperatures were in the mid to upper 50s, up to 15 degrees below average. Clouds began to stream in during the afternoon hours in advance of a cold front that brought showers and thunderstorms into the state overnight into Saturday (5th). The system cleared Iowa later in the day with cloudy conditions keeping temperatures unseasonably cool. Rain totals at 7 a.m. on Sunday (6th) morning ranged from a trace in Mapleton (Monona County) to 1.72 inches in Clutier (Tama County). Over 20 stations reported over an inch with the statewide average at 0.51 inches.

Weekly rainfall totals ranged from 0.09 inches near Davenport (Scott County) to 6.27 inches in Vinton (Benton County). The statewide weekly average precipitation was 3.40 inches, well above the normal of 0.66 inches. The week’s high temperature of 91 degrees was reported on the 30th at Waterloo Municipal Airport (Black Hawk County), 22 degrees above average. Mapleton (Monona County) and Sioux City Airport (Woodbury County) reported the week’s low temperature of 34 degrees on the 4th. This reading was on average eight degrees below normal. 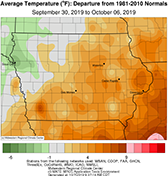 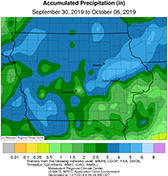