“An unexpected complex of thunderstorms moved through the state on Saturday producing heavy precipitation. This put a damper on the annual Cy-Hawk game but helped improve conditions, according to the U.S. Drought Monitor,” said Secretary Naig. “We also experienced a nice stretch of above-average temperatures last week which is helping the later-planted corn mature.”

The third cutting of alfalfa hay reached 84 percent, 4 days behind average. Pasture condition rated 43 percent good to excellent. There were a few reports of high numbers of insects around livestock and concerns for livestock in permanent pastures.

An active weather pattern returned to Iowa bringing unseasonably wet conditions across much of the state. Parts of northeastern Iowa observed rainfall totals from three to six inches above average while south-central Iowa experienced up to one inch deficits. Unseasonable warmth was also observed across the entire state with temperatures up to seven degrees above normal. The statewide average temperature was 70.3 degrees, 5.2 degrees warmer than expected.

Rain showers moved through parts of Iowa during the day on Sunday (8th) with cloudy conditions statewide. Temperatures stayed in the 60s across much of the state with low 70s across the south. Stronger thunderstorms popped up across central Iowa during the early morning hours of Monday (9th). As the storms moved northeast, locally heavy downpours were reported at multiple stations; three stations in Ames (Story County) observed totals from 1.21 inches to 1.39 inches.

Monday afternoon saw active conditions as a warm front lifted into central Iowa, creating unstable atmospheric conditions that helped force severe weather. A thunderstorm complex moved from west-central Iowa northeast through the evening hours. There were reports of severe straight-line winds across 22 counties with multiple observed wind gusts of 60 mph and a 70-mph wind gust in Colo (Story County). Over 80 stations reported rainfall above one inch with multiple stations in northeastern Iowa observing over two inches. Rain totals ranged from 0.01 inches to 2.85 inches in Persia (Harrison County) with the statewide average rainfall at 0.62 inches.

Thunderstorms lingered into Tuesday (10th) as an outflow boundary from northern storms moved west to east across Iowa. The storms dissipated just after noon as partly sunny conditions prevailed. Highs reached into the low to mid 80s. A line of thunderstorms moved into northwestern Iowa just after midnight on Wednesday (11th) with some embedded severe cells. The line lost strength during the morning hours and fizzled out in the afternoon. Clouds and rain kept highs in the mid 70s in the north with mid to upper 80s in southern Iowa. Isolated storms re-developed in eastern Iowa later in the evening with some storms moving over the same region. Rain totals were in the range of 0.50 inches to an inch across northern Iowa with heavier totals in the northeast; Dubuque (Dubuque County) reported 3.70 inches.

Thursday (12th) was another active weather day as a warm front lifted north across Iowa in the early morning hours with multiple lines of showers and thunderstorms.  Strong storms began to fire in an unstable atmosphere during the afternoon as a cold front swept west to east across the state. Thunderstorms became severe in northeastern Iowa during late afternoon with several reports of straight-line wind damage to trees. There was also a preliminary report of a weak tornado in Ossian (Winneshiek County).

Rain totals at 7 a.m. on Friday (13th) ranged from 0.01 inches at multiple stations to 4.07 inches at St. Ansgar (Mitchell County). With the passage of the cold front, Friday conditions were unseasonably cool with clouds gradually clearing the state. Highs reached into the mid 70s across the state’s southern half and upper 60s in the north; the statewide average high was 72 degrees, four degrees cooler than normal.

Saturday (14th) began with showers and thunderstorms across western Iowa that moved east through the early afternoon. Some of the storms turned severe with multiple reports of pea to dime-sized hail across central Iowa. Another wave a storms brought locally heavy rain totals to eastern Iowa with Muscatine (Muscatine County) observing 2.96 inches. These thunderstorms continued to exit southeast Iowa into Sunday (15th) morning.

Weekly rainfall totals ranged from 0.03 inches in Beaconsfield (Ringgold County) to 8.88 inches at Guttenberg Lock and Dam (Clayton County). The statewide weekly average precipitation was 2.54 inches, three times the normal of 0.81 inches. The week’s high temperature of 93 degrees was reported on the 12th in Muscatine (Muscatine County), 14 degrees above average. Cresco (Howard County) reported the week’s low temperature of 44 degrees on the 15th, three degrees below normal. 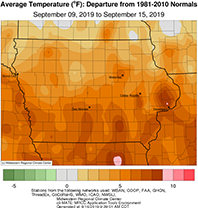 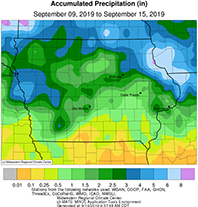