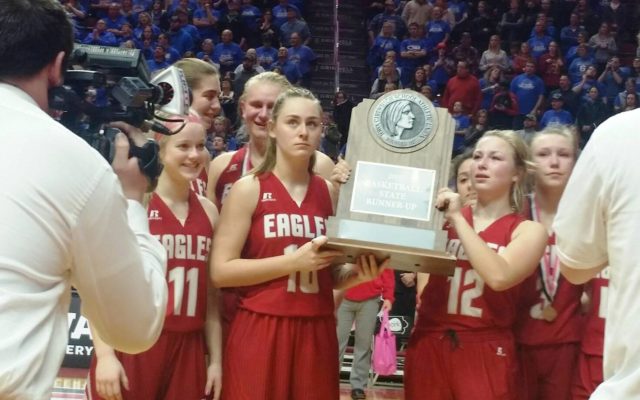 DES MOINES — Newell-Fonda’s pressure defense resulted in 31 points off of turnovers as the top-ranked Mustangs downed second-ranked West Hancock 76-52 in the Class 1A girls state championship game on Saturday night, as you heard on AM-1300 KGLO. Newell-Fonda forced 26 turnovers in the contest and led the game from start to finish, outscoring the Eagles 24-14 in the first quarter. West Hancock coach Paul Sonius says despite the loss, his team gained a lot of experience with the three games played last week.

Sonius says with a club with no seniors graduating, he knows his team will work hard to get back to the championship game next year.

Sonius says Newell-Fonda forced a number of turnovers in the first quarter and that made the difference for the game.

Sonius says his team doesn’t have anything to be ashamed about in falling in the championship game.

Rachel Leerar led the Eagles with 22 points while Amanda Chizek had 14 points and 14 rebounds. West Hancock ends their season with a 25-2 record while Newell-Fonda finished 27-0.

CLEAR LAKE — There will be a pep rally for the Clear Lake boys basketball team tonight. The event will start at 5:30 at the high school gymnasium. The Lions will play in the Class 3A state quarterfinals on Tuesday at 1 o’clock against West Delaware. There will be no school on Tuesday.

MASON CITY — The NIACC women gained the top seed for the Region XI tournament this week after beating Southeastern on Saturday 92-61 in Keokuk. Mandy Willems scored 45 points for the Lady Trojans in the win. NIACC will host either Little Priest Tribal College or Ellsworth in its tournament opener on Wednesday at 5:30 at the NIACC gym. Little Priest and Ellsworth meet tonight in a play-in game. NIACC and Kirkwood shared the Iowa Community College Athletic Conference regular season title with the Lady Trojans getting the top-seed through a tiebreaker. If NIACC would win Wednesday’s game, they’d host the Region XI Final Four on Saturday and Sunday.

MASON CITY — The NIACC men are the second seed in the Region XI tournament this week and will host Little Priest Tribal College on Tuesday at 7 o’clock. NIACC shared the Iowa Community College Athletic Conference regular season title with Kirkwood but lost the tiebreaker to determine who would be the top seed. If NIACC wins their game on Tuesday they would host the Iowa Lakes-Iowa Central winner on Thursday. NIACC beat Little Priest twice earlier this season.

IOWA CITY, Iowa (AP) — Megan Gustafson had 34 points and 12 rebounds for her 82nd career double-double in her final regular-season home game and No. 12 Iowa beat Northwestern 74-50 on Sunday.

She moved into sixth in Big Ten scoring in front of 12,051 fans, and set a single-season conference record for the most field-goals made.

Hannah Stewart and Kathleen Doyle each added 12 points for Iowa (23-6, 14-4), which finished undefeated at home with 15 wins. Gustafson was 14 of 17 from the field as Iowa shot 61.2 percent from the field despite making 4 of 13 from distance. The Hawkeyes had 25 assists on 30 field goals, led by Doyle seven.

Gustafson and fellow Iowa seniors Tania Davis and Stewart won 86 career games. With a good showing at the conference tournament next week, Iowa has a chance to secure a top-four seed in the NCAA Tournament for an opportunity to host potentially two games.

Mendoza (23-8) won by medical forfeit over Northwest Kansas’ Enkhbold Sukhbaatar in the 149-pound fifth-place match. Sukhbaatar had topped Mendoza 7-3 in a first-round match on Friday.

Luthens (13-9) gained a 5-3 sudden victory over Lackawanna’s Nathaniel White in the seventh-place match.