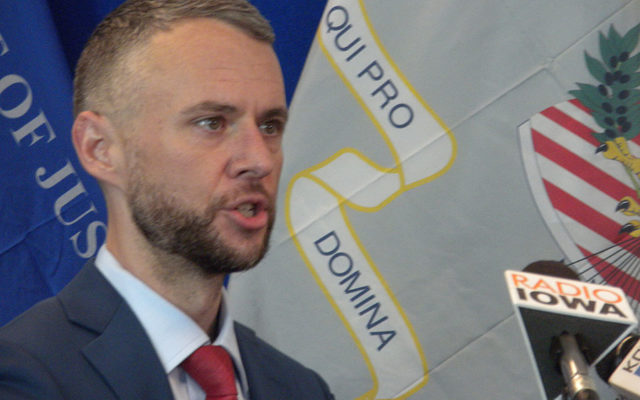 DES MOINES — The U.S. Attorney for the Southern District of Iowa announced the sentencing Friday of what he calls one of the most “violent and dangerous” gang members in Des Moines.

Attorney Marc Krickbaum, says 22-year-old Xzavier Clark was sentenced to ten years in prison for being a drug user in possession of a firearm. “This case is part of a much larger effort — and when I talk about Xzavier Clark — I can say with confidence that the streets of Des Moines are safer today — and will be safer for the next ten years — because he will spend that decade in federal prison,” Krickbaum says.

Krickbaum says Clark has been a shooter for the C-Block street gang, and was connected to several shootings. He says Clark shot at one man who was holding a child, and during a chase with police, tossed a loaded gun out onto the street.

Krickbaum says Clark’s arrest and sentencing is part of a bigger effort to get rid of illegal guns. “In the last few years, the U.S. Attorney’s office has brought federal gun charges against ten other gang members who are directly connected to Xzavier Clark,” according to Krickbaum. “Some of those people are fellow members of C-Block, so they are Xzavier Clark’s fellow gang members and associates. Some of those gang members are members of rival gangs who Mr. Clark was targeting and shooting at.” Krickbaum says the Des Moines Police Department investigated the case and was the reason Clark was brought to justice. 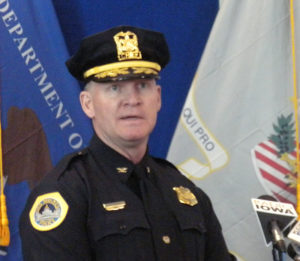 Des Moines Police Chief Dana Wingert says this will send a message to those in gangs. “Mr. Clark is just one example of things to come,” Wingert says.”Des Moines is a big small town. Central Iowa is collectively united. The communications and relationships are at an all-time high and we’ll work together to drive down violent crime.” Wingert says the number of guns in Des Moines has continued to increase — but the effort with local and federal officials is working to change that.

“We may not be able to arrest ourselves out of the number of guns on the street. We see that increase exponentially every year,” according to Wingert. “But what we can do is take a strategic approach to determine who is committing the violent crimes in our communities and target those individuals. That’s where today is significant. Mr. Clark is the first of many examples of how this is going to end.”

Krickbaum says the maximum sentence given to Clark shows they are determined to stop gun violence. “We want people to put down the guns — because if you carry them out on the streets of Des Moines and get involved in shootings — we will prosecute you and put you away for as long as we can, “Krickbaum says. He says the math is not worth it to lose ten years of your life to prison for illegally using a gun.

Krickbaum says the gangs used to be controlled on a national level — but that has changed. “Each city has its own gang problems that are fairly specific to that city. There can be some flow back and forth — but for the most part — Des Moines gangs are their own group of entities. They are not the same as Davenport gangs, they are not the same as Waterloo gangs, it’s much more localized today than it was a few decades ago.”

Krickbaum says his office is getting around ten new gun crimes referred to it each month. Wingert says his department has several ongoing investigations involving gang members.